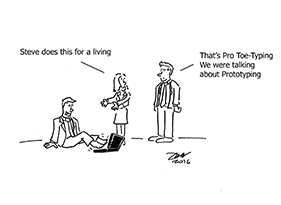 Why should anyone in the PR industry be interested in design thinking? Ezri Carlebach, Senior Associate at the PR Network, explains the connections between PR and design as crafts and why people that work in communications should use design thinking methods to future-proof their role as leading strategists within business.

It’s a truism to say that the world is changing faster than ever, as new technologies, new types of organisations, and new values and behaviours all compete for attention. This is particularly true in business, where these factors play a significant part in the ongoing post-crisis struggle to put purpose before profit. Leaders and opinion-formers in the business world have recently been talking about design thinking as one of the approaches that can help, and, since PR and communications practitioners aspire to be leaders, thought-leaders, and trusted advisers to leaders, they have been joining in the discussions.

In the interests of full disclosure, let me say that I am not a designer. However, in the past 15 years or so I have worked in leading design-related institutions, and been a client on some big design projects, as well as lots of small ones. From 2000 to 2006 I was head of communication at the Royal Society of Arts, an organisation founded on the principles of applying design to solving commercial, social, and environmental challenges, and I enjoyed a lot of exposure there to designers and design education. I also spent two years as deputy director of communication at University of the Arts London, which is comprised of six world-famous arts, fashion, and design colleges including Central Saint Martins and London College of Communication.

As designer and educator Victor Papanek put it, “design is the conscious and intuitive effort to impose meaningful order”, and while he intended that remark in a general sense, it is easy to see how it can apply in a specific sense to communication.

My understanding of design at a generic level is that it is how humans act to change the world around them. That change can be material, like carving something out of wood, or making objects from stone or glass, or making marks on a surface. But it can also be non-material, as in the design of services, or policies, or organisational reputations. Design is a primary means of ensuring human survival, improving quality of life, and – crucially – serving others. As designer and educator Victor Papanek put it, “design is the conscious and intuitive effort to impose meaningful order”, and while he intended that remark in a general sense, it is easy to see how it can apply in a specific sense to communication.

Design and communication are both ‘conscious and intuitive’ human capabilities, and, I would argue, both are craft-based in practice and professional in the way they’re organised.

In a new volume of essays on the future of PR, #FuturePRoof 2, I wrote that PR is craft-based because the core requirement of PR practitioners remains writing (see below), and writing is a craft. Thus, “writing is what we do with our hands in PR”. So there is a fundamental connection between design and public relations, broadly defined. There is also a growing alignment between the rise of design thinking in business, and the shift in public relations practice away from an industrial paradigm based on scientific management in the pursuit of strategic goals, and towards a digitally-led social paradigm which is, perhaps counter-intuitively, more craft-based and practical.

In a piece for the first edition of #FuturePRoof, entitled ‘Redesigning the public relations discipline at US agencies’, Renee Wilson, President of the PR Council, wrote that “[d]esign thinking is a hot area in business strategy, and for good reason. By putting an emphasis on future conditions rather than current needs, this approach can rewire an organization to compete at the highest level”. This is indicative of a high level of interest among communication associations around the world. In the last couple of years, I have run workshops on design thinking and communications for the International Association of Business Communicators, the Institute of Internal Communication, and the World Public Relations Forum.

At the World Public Relations Forum in Toronto in June, I set a design thinking challenge for an international group of PR practitioners and researchers: How to attract new talent into the PR industry. In their 2016 Global Communications Report on the PR industry, the USC Annenberg Center for Public Relations and the Holmes Report identified the top three challenges facing the industry as “content, technology, and talent”. Fred Cook, Director of the USC Center, said “it’s clear that finding the right talent is by far the most critical factor in the PR industry’s future growth”.

The report sets out what the industry is looking for based on the results of a large survey of both in-house and agency recruiters. They are all looking for the same core skills, which include strategic planning, verbal communication skills, social media expertise, and multimedia content development. But the number one requirement – by a considerable margin – is writing ability. Such is the dominance of good writing in recruiters’ expectations of new hires, Fred Cook describes it as “the price of admission” to the PR industry. Naturally, I got my workshop attendees in Toronto to write for me, and using a paper-bag exercise devised by British Library artist-educator Shelagh McCarthy, they also went through the basic design thinking steps of inspiration, ideation, and implementation, in devising tools and tactics to attract new PR talent. (You can see some of the results on my blog.)

Renee Wilson, President of the PR Council, wrote that “[d]esign thinking is a hot area in business strategy, and for good reason. By putting an emphasis on future conditions rather than current needs, this approach can rewire an organization to compete at the highest level”.

But let’s go back to the findings of the USC Annenberg/Holmes report for a moment. When asked what personal traits they felt were critical for future recruits to display, industry leaders ranked traditional teamwork and hard work as the most valuable. But they believed their teams were already strong in these areas. Where they said more horsepower is needed, is in transversal capabilities such as curiosity, creativity, and critical thinking. This highlights the importance of psychological, cognitive, and creative diversity alongside cultural, ethnic, and gender diversity as part of the response to our post-crisis, millennial-driven, and technologically-enhanced environment. It also shows the obvious connections between design thinking and the future skills needed by the PR industry.

In Toronto I wrapped up my session with a case study from a New York-based PR agency called Kwittken. Chief creative officer Jason Schlossberg kindly shared with me some insights on how Kwittken is using design thinking to improve internal processes through a six-step approach to building a design thinking communications function. The first step is to develop inter- and multi-disciplinary project teams to increase creativity. They found that this also helped to impose discipline and set clear goals from the start. The second step is to ground all thinking in insights and observable facts, creating a balance between an experiential (‘intuitive’) and an empirical (‘conscious’) basis for decision making. The third step is to identify the design problem in every PR brief, while the fourth step involves using both divergent and convergent thinking to generate innovation. Divergent thinking is the deliberate attempt to expand the range of options rather than narrow them, which represents something of a revolution from a traditional PR perspective. Step five is to create a culture of rapid prototyping. To illustrate this, Jason contrasts the smart, entrepreneurial approach with which his team produce a minimum viable pitch for every brief, that can be tested, and improved or ditched, with a story from Business Insider describing “The 45 day planning process that goes into creating a single corporate tweet…” Finally, the team reviews the previous five steps to hone their intuition and pattern recognition skills; and to look for a balance of emotional and functional ideas.

The old adage says that necessity is the mother of invention. But I don’t agree – I think design is. And if design is the mother of invention, then design thinking is the midwife. Bringing the skills and attributes associated with design thinking into public relations can help practitioners ‘futureproof’ their practice, and help them deal with the growing complexity and challenge of the 21st century PR and communications landscape. 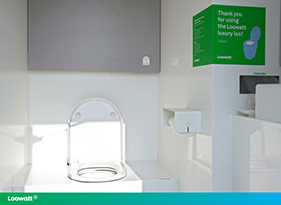 What a Loo – Meet the innovative new product